Back to the Wall

One of the leading figures in international contemporary dance has been in Belfast, working on a ground-breaking new inter-generational piece entitled Back to the Wall.

Berlin-based choreographer Royston Maldoom is well known and highly respected for his work over the years with a vast cross section of people of all ages and backgrounds.  As one of the founder members and artistic consultant for DU Dance, Maldoom continues to visit Northern Ireland on a regular basis and has a long-standing professional partnership with the company’s artistic director Mags Byrne.

Back to the Wall brings together three generations of men and boys, aged between 7 years and 80 years.  The group comprises boys from Elmgrove Primary School in east Belfast, young men in their 20s, all of whom have dance experience, and older men from Clanmil Housing (some of whom are the grandfathers of the younger boys).

As enthusiastic and positive as ever, Maldoom is clearly relishing the way in which his current project came together.

“Every single member of the groups is incredibly willing and receptive,” he says.  “I have been working separately with the groups and together in a single entity.”

“Our theme is Walls, something I have a lot of experience of, from living in Berlin and working in so many contentious, contested and divided environments.  But this piece will be more physical than political.  It will ask what’s on the other side, how do you get from one side of a wall to another, what are the physical possibilities posed by a wall?  The young boys are extraordinary in their energy and creativity; the young men are bringing their varied experience of dance, from contemporary to hip-hop; and many of the elders have amazed themselves in how much they have been able to do.”

This piece culminated in a short film, Back to the Wall, produced and directed by film-maker Gerard Stratton, of Triple Vision, who is responsible for several award winning short films.   The film was shot in a number of locations in Belfast over ten days.

There will be a special screening of the film for participants, friends, family and invited guests on 20th February at the Crescent Arts Centre, Belfast where the film will also then be screening throughout the City Dance 2014 event. 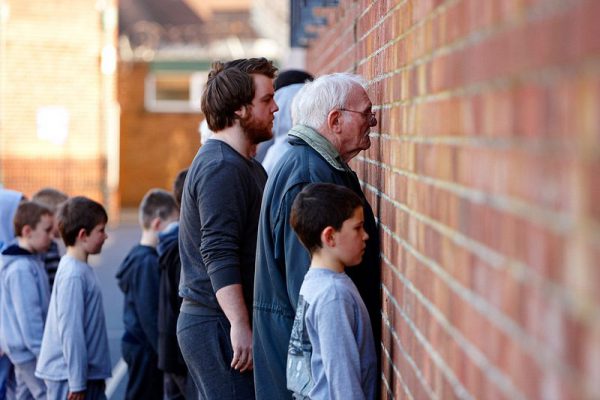